Start a Wiki
watch 02:24
Suicide Squad: Official Trailer
Do you like this video?

"I wanna build a team of some very bad people, who I think can do some good."
—Amanda Waller.

Suicide Squad is a 2016 American film based on the DC Comics anti-hero team Suicide Squad. It's the third installment in the DC Comics' Extended Universe. The film is written and directed by David Ayer, and produced by Charles Roven and Richard Suckle. It stars Will Smith, Jared Leto, Margot Robbie, Joel Kinnaman, Jai Courtney, Cara Delevingne and Viola Davis. It's produced by Dune Entertainment and distributed by Warner Bros., the film premiered in New York City on August 1, 2016, and was released in the United States on August 5, 2016, in 2D, 3D and IMAX 3D.

Development began in 2014 whilst Batman v Superman: Dawn of Justice was filming and full plans for the shared universe were being developed. Director Ayer signed on to write and direct in September 2014, and by October, the casting process had begun. Principal photography began on April 13, 2015, in Toronto, Ontario, with additional filming in Chicago, Illinois, and ended in August that year.

A team of the world’s most dangerous, incarcerated Super Villains, are sent on a mission to defeat an enigmatic, insuperable entity. U.S. intelligence officer Amanda Waller has determined only a secretly convened group of disparate, despicable individuals with next to nothing to lose will do. However, once they realize they weren’t picked to succeed but chosen for their patent culpability when they inevitably fail, will the Suicide Squad resolve to die trying, or decide it’s every man for himself?

At Belle Reve, a Black Ops security prison, Floyd Lawton is in his cell as Captain Griggs arrives with his men and dinner. Griggs disrespects Lawton who replies that he will one day get his revenge on Griggs. Griggs has his men take Lawton and they beat him.

Elsewhere in Belle Reve, Harley Quinn is hanging from the bars in her own secluded cell. Griggs tries to sweet talk Quinn to keep off the bars. Quinn tries to seduce Griggs into entering her cell so Griggs has her cell electrified, shocking Quinn. Quinn then charges at the cell knocking herself out.

In Washington D.C., A.R.G.U.S. Director Amanda Waller arrives at restaurant Cicada where she meets with Admiral Olsen and Dexter Tolliver where she wants to discuss her Task Force X Project, in the aftermath of Superman's death, leaving nobody to tackle Metahuman forces who want to attack America. She proceeds to discuss her candidates, Floyd Lawton aka Deadshot, Harley Quinn, Captain Boomerang, Waylon Jones, Chato Santana and June Moone who is possessed by a witch called Enchantress. Waller proceeds to provide the history of each of the villains she wants to recruit into Task Force X to the two men, with Olsen disgusted that Waller wants to put the national security of America in the hands of gangbangers, witches and crocodiles. Waller then says that she plans to have Colonel Richard Flag, Jr. lead the team, and that she controls the Enchantress by holding her heart against her, while orchestrating Flag & Moone falling in love.

At the Pentagon, Dexter Tolliver is leading a National Security Advisor's meeting talking about what happens if the next Superman turns against America. Waller proceeds to say that the next war will be fought with Metahumans and introduces Dr. Moone, who turns into Enchantress and teleports away, before returning with a book from the weapons vault in Tehran. Waller then demonstrates her control over the Enchantress as Tolliver moves to vote for Waller to activate Task Force X under the A.R.G.U.S. program.

With Task Force X approved, Waller, Flag and Moone head to Belle Reve to recruit their team members. Waller visits Quinn, Flag visits Killer Croc and they see Chato Santana, who refuses to fight for them and says that he wishes to die in peace and never fight again.

Floyd Lawton is brought to a shooting range where Flag has his handcuffs taken off. They ask to see what Lawton can do with a firearm, as he threatens to shoot Griggs in the head. Waller goads him into killing Griggs, fainting that the firing pin had been filed down. Lawton shoots the roof and then demonstrates his skills, using every weapon in front of him to shoot the targets, hitting the same bullet hole on every target. He then tells Flag and Waller his terms for them hiring his services, to which they play along before they say he is no position to bargain before he is taken away.

At his house a depressed Joker is sat in his living room full of weapons as Jonny Frost enters. Joker asks where Harley is and Frost tells him that she has been taken to a Black Ops site in Louisiana and there are other villains disappearing too. Joker tells him to bring the car around as they're going for a drive before laughing hysterically.

At a Casino, Griggs is gambling and loses his money before asking to borrow another $10,000 before he is taken into the back of the kitchen. Frost enters shortly followed by Joker who says he wants to make friends with Griggs.

In February 2009, Warner Bros. was developing a Suicide Squad film, with Dan Lin, Colin Wilson, and Charles Roven producing,[1] and Justin Marks writing the script.[2] David Ayer signed on to direct and write the film in September 2014.[3][4] On October 20, 2014, director Ayer talked to Empire Online about the film, and he said "that it's a Dirty Dozen with supervillains" as he based the screenplay on various Suicide Squad comics and material for the screenplay. Citing a reason that "The DC Universe is too rich to go very far astray."[5][6] On March 28, 2015, Ayer teased that the film would also feature Arkham Asylum, in which several members of the Suicide Squad are incarcerated.[7]

Filming was scheduled to begin in mid-April and end in August 2015, utilizing different locations in and around Toronto, Ontario.[8] On December 1, 2014, The Hollywood Reporter revealed that the Pinewood Toronto Studios had been booked to start the pre-production in February, and that filming would take place from mid-April to September.[9] Filming was intended to commence on April 15, 2015 in Toronto.[10] In February 2015, Ayer tweeted some photos from the set, while they were preparing to start the production.[11] In early-March 2015, Leto tweeted his new look with shaved beard and trimmed locks in preparation for his role.[12] Filming began on April 13, 2015 and will conclude on August 30, 2015.[13] Filming commenced on April 13, 2015.[14] On April 26 and 27, filming is scheduled to take place at the Hy's Steakhouse.[15] A "snowstorm" scene was filmed on April 29 on the Adelaide St. and in Ching Lane.[16] On May 5, a few major scenes were filmed in downtown Toronto next to Yonge and Dundas square. Street signs were removed for privacy reasons during filming that night.[17] Later in the month, a Batman stunt double was seen on set chasing down the Joker and Harley Quinn in Toronto.[18][19] Principal photography wrapped in August 2015.[20][21]

Suicide Squad received generally negative reviews from critics. On Rotten Tomatoes, the film has a rating of 27%, based on 282 reviews, with an average rating of 4.7/10. The site's critical consensus reads, "Suicide Squad boasts a talented cast and a little more humor than previous DCEU efforts, but they aren't enough to save the disappointing end result from a muddled plot, thinly written characters, and choppy directing." On Metacritic, the film has a score of 40 out of 100, based on 53 critics, indicating "mixed or average reviews". Audiences polled by CinemaScore gave the film an average grade of "B+" on an A+ to F scale.

Rolling Stone's Peter Travers wrote, "DC Comics tries something different with Suicide Squad, an all-star collection of crime fighting villains—and the result is anything but super." Richard Lawson of Vanity Fair said, "Suicide Squad is just bad. It's ugly and boring, a toxic combination that means the film's highly fetishized violence doesn't even have the exciting tingle of the wicked or the taboo." Writing for The Wall Street Journal, Joe Morgenstern heavily criticized the film saying, "In a word, Suicide Squad is trash. In two words, it's ugly trash." He further said, it "amounts to an all-out attack on the whole idea of entertainment," and called the film a product of "shameless pandering".

Chris Nashawaty of Entertainment Weekly gave the film B− saying, "Suicide Squad kicks off with fizzy, punk-rock ferocity before turning flat and spiraling into familiar formulas," and called Jared Leto's Joker "wasted" and "stranded in the periphery". He concluded by saying, "For DC, Suicide Squad is a small step forward. But it could have been a giant leap." IGN gave the film 5.9/10, saying: "Suicide Squad is a decidedly different flavor than Batman v Superman. It goes for subversive, funny and stylish, and it succeeds wildly during the first act. But then the movie turns into something predictable and unexciting." Drew McWeeny from HitFix gave it a positive review, writing "Suicide Squad is not the darkest mainstream superhero comic book movie ever made, nor is it even the darkest live-action film featuring Batman ever made. However, it is gleefully nihilistic, and it takes a different approach to what has become a fairly familiar story form at this point, right at the moment when it feels like superhero movies either have to evolve or die." Brian Truitt from USA Today wrote, "Compared to its ilk, Suicide Squad is an excellently quirky, proudly raised middle finger to the staid superhero-movie establishment."

Jared Leto's and Margot Robbie's performances as The Joker and Harley Quinn, respectively, were widely praised as standouts, with many critics eager to see more of the characters in future films. Paul Dini, the creator of Harley Quinn, said that Robbie "nailed" the character. David Fear of Rolling Stone, however, wrote that the "biggest letdown is the way the movie under serves both Harley and the actor playing her", and that one "can't forgive nearly ruining a complex, iconic character who deserves way better than this". Richard Lawson criticized her similarly, writing that "most fans of Harley Quinn—male, female, gay, straight—will be disappointed".

The novelization of Suicide Squad was written by Marv Wolfman and released on August 5, 2016, the same day as the feature film of the same name. The Novel follows the plot of the film closely with only a few changes visible, and sometimes expanding upon other scenes. 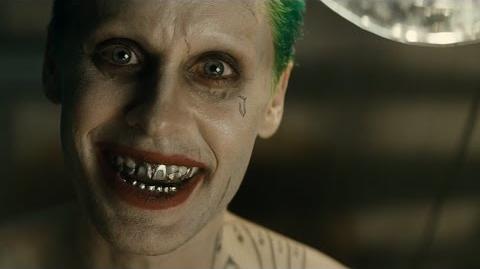 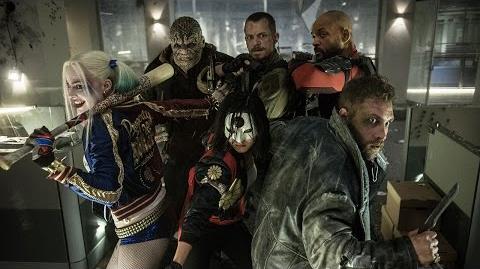 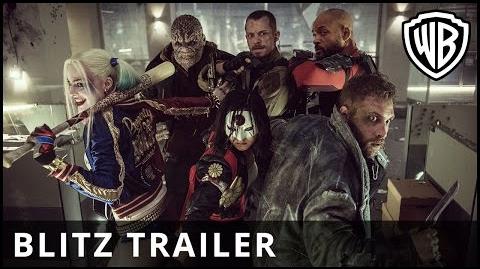 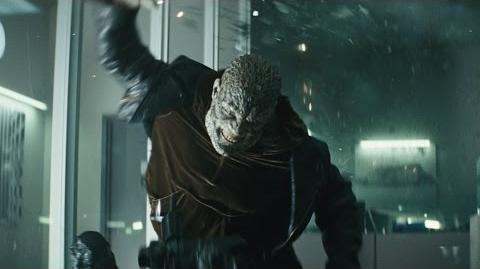 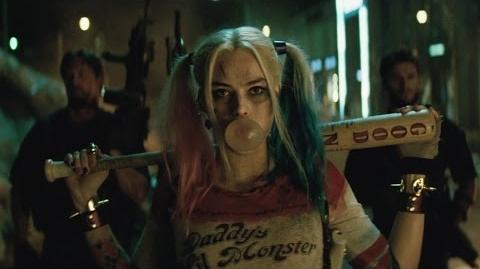 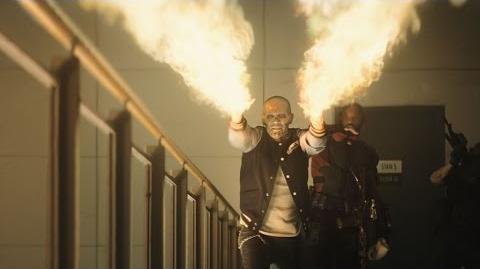 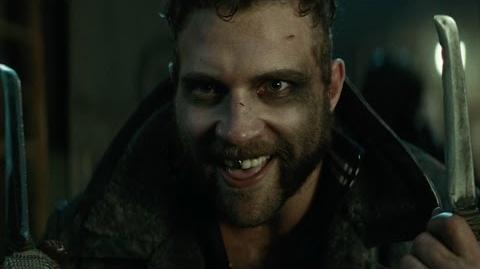 Retrieved from "https://dccomicsextendeduniverse.fandom.com/wiki/Suicide_Squad?oldid=66260"
Community content is available under CC-BY-SA unless otherwise noted.